Trip update: I spent last weekend and Monday riding down the Old Chisolm Trail from Georgetown, Texas, to San Antonio. The famous site of the pre-railroad cattle drives snakes north-south along the Balcones Fault, where sharp hills look out over the plains to East Texas. Springs in the Fault and centuries of flash floods have cut rivers and arroyos across the path of the Trail. You can see them running below the bridges of Interstate Highway 35 and the railroad to Mexico.

In Austin, I relearned the lesson that roaming with a cellphone puts a serious drain on the battery. I had not been in airplane mode as much as I thought, but with the help of the technicians at Best Buy and Battery Giant, I determined that my phone was not dying yet. I bought a spare battery. It is in a waterproof bag with 50% charge, the best for long-term storage. The next day, I was more attentive about staying in airplane mode except to check messages every hour. The battery lasted just fine.

When I rolled into Austin, I could immediately appreciate why the League of American Bicyclists designated the city as a Silver-level Bicycle Friendly Community. It was more than the infrastructure (lanes, signs, etc.). There was an attitude in the traffic. With so many bicycles and pedicabs, the drivers just seemed to flow naturally with the non-motorized road users. Police in pairs on bicycles did not hurt, and reportedly, they are even-handed about ticketing bicyclists as well as motorists.

From loose cleats and clickety pedals to flat tires, I have already had to reach into my repair kit several times each week. Let’s see what’s in there.

A repair kit is like that well-known credit card ad, “don’t leave home without it.”

However, it is too easy to carry more heavy tools then you need. I carry two levels of repair kit. The first is a minimalist kit for short rides. This is the kit that is always strapped to my bicycle:

–          small bottle of hand cleaner wrapped in an old handkerchief. 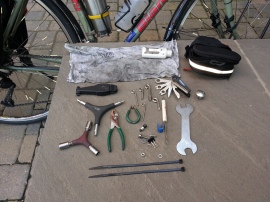 Of course, there is a tire pump attached to my top tube. Also, the repair kit bag itself has a pocket where I put a business card and a folded up paper with my prescriptions and supplements.

The second level of repair kit adds those items that I need when I cannot limp home. The small items go in the repair kit; the others are packed elsewhere on the bike:

Selecting tools is an opportunity to combine light weight and practicality intelligently . For example, I replaced the two heavy bone wrenches and the two multi-tools with individual wrenches and sockets in exactly the sizes of every nut and bolt on my bicycle, and added a small ratchet handle. I used to carry a large bicyclist’s Swiss Army knife, but now I have a very small Swiss Army pocket knife in my jersey for when I need to cut something (or clean my fingernails). I would prefer metal tire irons, but I admit that the plastic ones are much lighter, considering how infrequently I need them.

The sharpened spoke is for extracting the broken-off leaden plug on the end of a derailleur cable or a gear cable from inside the shifter apparatus on the handlebars. This is a very difficult operation if the cable end falls down into the mechanism. The mechanics at Performance Bike in Charlottesville showed me how they do this.

Having a spare 20 (USD/EUR) and something smaller (five 1-dollar bills, for example) make sense. A one-dollar bill can serve as an inside patch on your tire casing if you suffer a slash from debris. Just fold the dollar bill enough so that it is bigger than the gash in your tire; the pressure from the inner tube will hold it in place. (Thanks to Mike, the Wrench, at Bicycling Magazine, www.bicycling.com, for this tip).

One needs to look ahead and consider conditions, and be ready to adjust the contents of the repair kit. There are some places where I would like to fold up an entire spare tire in my pannier, or carry the metal tire irons. I have figured out how to clean my chain in different places, especially if there is no bike shop around. I found a small bottle of liquid WD-40 at Georgetown Bicycle Shop. That and the Vetta® chain cleaner are sealed with some shop rags in the “bounce box.”

Next week, I would like to share what I have learned about sleep and resting. They are even more important than the riding, if you want to be able to keep working steadily for the long haul.

Nothing I have to say is more important than what you want to know, so please feel free to comment or to ask questions. What I don’t know, I will find out.

2 thoughts on “The Repair Kit”