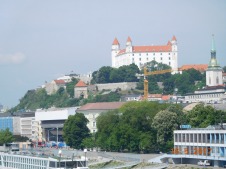 Tuesday morning, the 16th, I rose early, excited to be on my way again. Crossing to the right bank of the bank of the Danube, I quickly found myself in Austria on a dedicated bicycle path that led south into the fertile floodplain. The wind was out of the southwest. Had it been any stronger, it might have posed a problem from the outset. But the air was warm, and the day was sunny. I revelled in the fresh air and the smooth pavement leading me among the wind farms. Below the turbines, immense fields stretched to the horizon. I recognized corn and rapeseed, but not most of the other crops. This early in the spring, it all looks like a lawn that needs mowing.

One thing about these bike paths, which cover Austria as thickly as the road network: they often skip many of the towns. One cannot plan on taking a break “at the next town.” Often the next town is two or three kilometers away across the fields! I stopped at the 40-km point at a wayside shrine that had a bench, and ate my trail mix and a chocolate bar for lunch.

As I relaxed, road racers of both sexes sped by on their workouts. That is the sign of a good bicycle network to me: when the road racers, who need excellent pavement more than the rest of us, use the network instead of the roads. In Italy, one would never find an expensive road bike on a bike path.

The flatness of the terrain surprised me. I could see mountains in the distance, but between the floodplain of the Danube and the lowlands around the Neusiedler See, the arable plains stretch well into Hungary and Slovakia. Some of the signs intrigued me, because I could not figure them out. One, a blue N with a star, looked like a US Naval Academy varsity letter. I learned that it is the commercial logo for the region of Lower Austria (Nieder Österreich). I think that the coat of arms is more attractive. Another frequent sign rose out of the corn fields: Achtung! Rehwechsel. I got “Attention!” but the other word was one of those combined German nouns. I did not know where to split it, so I could look it up. That night, my host decoded it: “deer crossing.” Besides learning that reh meant “deer,” I now know that wechsel (“change, exchange”) captures the concept of crossing more than just currencies. Curious, too, that they would not use the international sign for a deer crossing, which has a fine picture of a mature stag gracefully leaping across the street. Maybe the idea is not to inform too well: perhaps the corn farming company would like foreign tourists to take out a few deer! It occurred to me that the signs were placed too low to be visible after the corn began to mature. Mmmm… 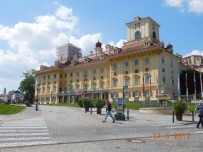 After 50 km, riding along the scenic Lake Neusiedler, I began to wonder where Eisenstadt was. I expected a hill town, with a massive Schloß dominating the fertile valley. Instead, the castle turned out to be a palace, and the town was only halfway up a low hill. I did not even see it until I had ridden 65 km. I should have stopped, but I pushed myself all the way to the home of Ingo and Betty, my Air BnB hosts. I arrived at 1700, exactly as predicted when I left Bratislava.

Betty greeted me at the door of their 700-year-old, renovated home. The outside hid the marvellous décor of the interior, which melded elements of the medieval and the modern in a tasteful and practical way. A space-age kitchen dominated the ground floor. I was given the ground floor practically as my own, because Betty and Ingo lived upstairs.

I was surprised that Betty was even on AirBnB, when I saw that she was using a crutch to get around. She had had hip replacement surgery two days before, and was already able to move around. One tough lady.

After I settled into my room, showered, and changed, Ingo came home from the vo-tech high school where he teaches. He opened the gates to the yard, pulled up a table and some chairs, and we sat in the gateway, chatting and greeting the many passers-by who knew them. What a delightful way to enjoy a beer after a long ride.

My hosts were not planning to make supper. I walked up to Pronti Pizza near the house, and brought home a spicy box of donner kebab on rice, which I had in my room. Pizza and donner kebab seem to have become the fast food of choice in Mittel Europa.

The next day, I went to the grocery store for supplies, then walked up to Schloß Esterhazy, my main objective for Eisenstadt. The Esterhazy princes ruled all of Burgenland and a large chunk of Northwestern Hungary until 1949, when the Communist government confiscated all their property in Hungary. The family seat is in Eisenstadt, but Schloß Esterhazy is modest compared to the Eszterhaza Palace in Hungary. Still, it was a beautiful palace. I can see why the family loved it so much, especially the 20th century Esterhazy’s. 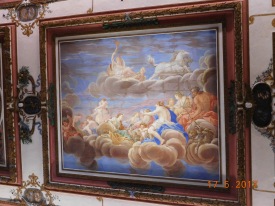 In addition to confiscating his land, the Communists arrested Prince Paul and sentenced him to 15 years in prison after a show trial. He escaped during the revolution of 1956 with the help of loyal retainers. Prince Paul and Princess Melinda lived a modest life in Zurich, returning often to Burgenland to manage their estates there. After the Prince died, Melinda transferred the family holdings into self-supporting foundations, so that the winery, the castle, and the other holdings could continue to operate without the family (they had no children).

By the way, I noticed that in Burgenland and Lower Austria, the old German orthography seems to be preferred, at least for place names, so I am using the ß instead of the modern “ss”.

Arguably, Schloß Esterhazy’s most famous resident was not a prince, but a musician: Joseph Haydn, who was the Kappelmeister there for more than 40 years. Today, the Haydnsalle in the Schloß is the venue for classical performances year-round. Only a short drive from Vienna or Bratislava on the autobahn, the concerts are well-subscribed, not depending on the residents of the charming little town around the Schloß.

Daniel will be singing an informal midday concert with the University of Illinois Choir in this venue on 30 May. Although I will get to hear them in Vienna, it would have been nice to sit in this wonderful auditorium, too.

Route B10, the Neusiedler See Radweg (Lake Neusidler Cycle Track) was calling me to ride around the beautiful lake. With a sunny forecast until the weekend, I arranged to stay two more days with Ingo and Betty. On Thursday, I rode 105.5 km around the lake.

First, I rode to Rust, which apart from being small and scenic, is famous for the storks that roost on the buildings in the historic center. There seemed to be nothing rusty about the pretty little town, so I wondered if the name Rust was a takeoff on the word roost, which means the same thing in German and English.

There was a stiff southwesterly wind blowing as I left Rust and headed north around the lake. I averaged better than 22 km/hr until I reached the town of Neusiedler am See at the north end. Then it was into the wind. I was protected by trees and windbreaks often, but it was much slower going.

Nevertheless, I made the ferry at Immiltz with two more ferries to spare. Crossing to Mörbisch by 1730, I was back in Eisenstadt by 1900. 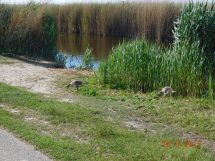 The southern end of the Neusiedler See stretches into Hungary. Both Austria and Hungary have made it a national park, and the wetlands around the lake are well-preserved. Fish and waterfowl are abundant. I saw goslings among the reeds and running through the vineyards near the lake as I rode.

Friday, I rested, wrote, and planned my next few days. I had reservations in Vienna starting on Wednesday, the 24th, and plenty of time to visit the city after I arrived there. With rain forecast for Saturday night, I decided to leave Burgenland, and to camp in the woods of Lower Austria for the next four days. This would also give me a chance to test out my camping kit in the rain, with time for it to dry out.

My friend Giovanna wrote me that the discount card from ACSI in the Netherlands finally arrived, some three weeks after the “guaranteed delivery”. She sent me a photo of it, and forwarded the package to our colleague Marianne in the Netherlands. I hope the photo will be accepted at the various campgrounds until I can catch up with the card in the Netherlands. It is wonderful to have friends and colleagues in a business like translating: by the nature of our work and our passion, we are all over the world!

Having done as  much as I could to get ready, I joined Ingo and Betty and their friends in the gateway for a beer. Betty had made enough for lunch that we were able to nuke the leftovers for supper. I turned in early. As I had every night in this quiet town, I slept soundly.