“I took the one less traveled by,

And that has made all the difference.”

The mountain was not as steep as some that we had already climbed, but it seemed interminably long. It was not as hot today as it had been earlier, but I was drenched with sweat. To keep up a steady cadence on my pedals, I repeated the artilleryman’s mantra as I stroked,

My legs no longer burned like they did the first week, so I must be getting stronger. But there was no denying that she was faster, stronger, and lighter.

As the distance between us increased, I changed my objective from riding with her, to keeping her in sight.

Every so often she would disappear behind another bend in the road. The only way that I was keeping up at all was that she would stop every so often to take photographs. That camera was my friend.

Only a few days before, we had left Québec City, riding toward the Gaspé Peninsula. I had always been a “vehicular cyclist,” meaning that I was used to sharing the road with traffic, riding in the cities, and going where the cars go, because it was the shortest distance to where I needed to be next. The road less travelled was usually not going where I was.

But this was different. Traffic amounted to four or five automobiles and a couple of logging trucks every hour. Our objective was not really the next town: it was the next mountain, plateau, beach, or cliff.

I caught up with her again, taking pictures by the side of the road. Below us, the coast weaved like a white snake on a green and blue carpet into the distance. I could hear the waves crashing against the cliffs.

“You really like climbing mountains, don’t you?” I asked.

I laughed. “Well,” I said, “there had better be an incredibly good view at the top of this one!” We took long pulls from our water bottles, and started climbing again.

To my surprise, the road leveled off without a panoramic view, and plunged through a narrow cut to the next seaside village.

“See you on the next climb!” I shouted as I flew by her. My greater weight gave me more acceleration and stability on the downhill runs.

By the time we reached Nova Scotia, I was riding with her most of the day. On Cape Breton Island’s Cabot Trail, we alternated being first to the top. After two weeks of the cleanest air that I had ever experienced ashore, my lung capacity felt like it was increasing, even as my legs got used to the hills and the daily distance….

There’s a railroad out here,” I said. At the next bend, we saw the steel highway come out from the interior.

“How did you know it was here? It’s not on our map,” she asked, as we rode alongside the rails for a while.

“I smelled the creosote in the railroad ties. It had to be that or a storage yard for telephone poles.” Then it hit me: I was smelling railroad ties long before we could see them….

We were riding along the southern edge of the Saint Lawrence Seaway, where the fresh water from Canada’s melting glacial ice meets the salt water of the Atlantic Ocean.

“You’ll know when we reach the Atlantic,” I had told her the day before. “The water will change color.”

But it was my nose that notified us that we had met the Atlantic, between La Pocatière and Rivière du Loup.

“Can you tell how different the coast smells?” I asked.

“It’s actually a different fishiness. I’m a salt-water sailor, and this is what a coastline smells like to me. There’s a saltiness in the air, too – not much, but it’s growing.”

We stopped to rest at a lookout, and, sure enough, we could see how the fresh-water blue was yielding to the greenish hue of the Atlantic. It was subtle, but you could see the clear difference by looking upstream, then down toward the mouth of the Seaway….

Annoyed by the steady, low, rubbing noise, I kept checking my bike as I rode, wondering if the brake was stuck, or some piece of my gear was touching the tires. A gentle tailwind was pushing us along a flat stretch of New Brunswick’s Northern Shore. The last car had passed us some time ago.

Suddenly, I realized that the noise wasn’t a problem at all.

“Can you hear our tires on the pavement?” I called out.

“I have never heard that before. I thought something was rubbing.”

“That’s because you were always surrounded by traffic noise,” she said.

“You’re right,” I said, accelerating to come alongside her. “But it’s also been quiet enough out here the last few days for my ears to adjust. This is so cool.”

“Wait till the next truck comes along.” She smiled, and clicked into a higher gear…

The next day we battled a stiff crosswind, making our way to Prince Edward Island. We had only paused long enough to chat with an elderly Austrian couple riding in the opposite direction. Now we were pushing along a desolate seashore.

“Hear that two-tone song?” I asked her.

“It’s your disc brakes. When you get at a certain angle in this crosswind, the rotors sing – like blowing over the top of a bottle.”

Such are the joys of riding in remote areas, which I discovered this summer. I had always known that the beautiful places were out there, but they were visual: pictures on a postcard or a beautiful painting in a museum. I had seen many wonderful places in my life, but never had I been so close to natural grandeur as riding through the Maritime Provinces of Canada. Riding in cities and on busy highways, I had not been not looking around me anymore than I did when in a car or a train. Surrounded by motor traffic, I could not appreciate the smells and sounds of nature. Breathing more car exhaust than air, it was no wonder that I preferred flat, straight stretches to the strain of pulling a heavy load up a hill. And so I never saw the great vistas that North America has to offer. 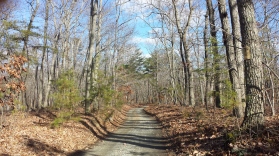 It’s different now. I will continue to design my travel based on destinations that include friends and family, but I will take longer to get to each one, because I will probably take the road less traveled more often.

Next week, a sea story. Keep those comments coming.

9 thoughts on “How I have changed: breathing, smelling, hearing…”