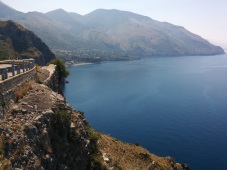 On Friday (3 July 2015), we rolled 64 km through Basilicata and Calabria, but I thought that we were still heading for Reggio Calabria and around the toe. We would not spend too much of July in the far south. The days, while hot and sunny, had not really changed much from Rome.

The road to Paola provided more stunning seacoast. We particularly enjoyed the cleanliness and pleasant temperature of the water. Early on, we established a habit of stopping for a swim during the hottest part of the day. It took only a few minutes to dry off in the sun, so we did not delay our progress more than a pleasant rest break. Cooling the body core also reenergized us for the rest of the ride each day.

I particularly enjoyed a beach just south of the Basilicata border, after a tunnel. Along the coast ran a long line of the usual beach establishments, each with its bouncers trying to claim territorial rights over public land. In fact, they could only insist on renting the chaises and beach umbrellas, but there was nothing to be gained by arguing. Near the tunnel, a new beach restaurant had not yet opened, though the beach was groomed and empty. Ahh!

The coast of Basilicata and northern Calabria also featured fewer towns, with the mountains and ocean closer together. Traffic was light, and the weather pleasant. Paola came quickly, and we were settled in our B&B before dark.

Paola’s claim to fame comes from native son Saint Francis of Paola, one of Italy’s most revered saints (that’s saying a lot, for Italy).

On Saturday, we walked through the medieval historic center, past the ancient churches, and the house where St. Francis was born and lived. The house told me a lot. Francis did not come from humble beginnings. 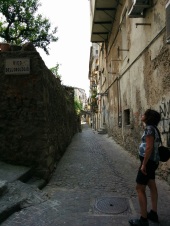 In the afternoon we went to Cosenza, long the proud capital of the region, and one-time world-renowned University. It is still a University town.

We loaded our bikes on the train and sped into the interior. Cheryl had found us a jewel of a B&B, hidden in the old town. It took a while to find. After schlepping our loads down some large, very old steps, we concluded that we would not touch our bikes until it was time to go back to Paola.

Hidden behind the humble stone of the buildings, the San Matteo Palace proved to be a visual delight. The breakfasts were ample, served in the kitchen of the palace.

Cosenza earned its glowing writeup in the Michelin guide.

It sits at the confluence of two rivers, the Busento and the Crati. Inhabited since prehistoric times, it has always dominated the valley between the Sila Mountains and the coastal range. The rivers separate the historic town from modern Cosenza, with its railroads, university, apartment buildings and factories.

In the old town, we came across an archeological site that had been renovated by restoring the wooden parts of the buildings of the Roman town that lay beneath the medieval one. A large acrylic roof covered the site, so that we could walk over the ancient town and see what the ruins looked like.The amount of biodegradable material (timber, straw, etc.) that went into these buildings impressed me. The towns were very liveable, even by modern standards.

In addition to this open-air exhibit, Cosenza also has several excellent museums. The National Gallery (Palazzo Arnone), near our B&B houses a very fine collection of Renaissance painting, donated by the Carime Bank. The Museum of the Bretii and Enotri displays relics from the very large digs near town, and taught me more about pre-Roman history in these parts than I ever knew. We spent two days walking through the town, dining in trattorie, and enjoying live music in a riverside restaurant. A romantic place, worth a side trip such as we made.

Monday, we rode back to the station, and boarded the train back to Paola. We switched to a train heading south, and got off in Pizzo. We rode 35 km through prime farmland (home to the Tropea red onion) to the end of the promontory where stood the town of Tropea. 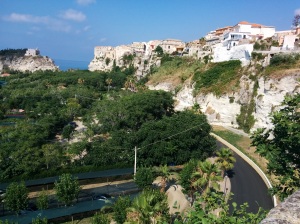 Cheryl told me that it would be like St. Tropez used to be, and she nailed it. Expensive, compared to other resorts, but not like France, a harbour full of yachts of all sizes, but not as many. And the tourists clearly came from a better-off average economic class than the crowds we had seen up to then. Unlike St. Tropez, Tropea boasted a delightful medieval historic center.

It almost felt like Disneyland, because the town had closed it to motor traffic, and the storefronts and opening hours clearly catered to the throngs of tourists walking around at night.

Isle of Tropea, across from the town

Cheryl was beginning to impress me with her ability to pick restaurants as well as hotels. She would casually saunter past most eateries, check a few menus, then head back to the winner. Sometimes she would simply stop, point, and say “there!” In Tropea, we went to what sounded like an English imitation (Pimm’s), but which turned out to be an authentic Italian restaurant at an international level. 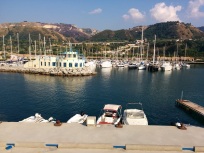 We ordered a degustation, the first that we had encountered on this trip. Seven courses, with wine and caffé, cost less than ordering half the items a la carte. Cheryl observed that the chefs often put their hearts and creativity into such menus, so the quality went on show, too. A delightful three hours later, we walked back to the hotel, which hung on a cliff overlooking the coast, down the road from the city itself. We made a point of looking for these upscale versions of the prix fixe menu for the rest of the trip.

At this point the temptation to ride on Sicily overcame us. We were so close, and the weather really had not affected us much. Plus, neither of us had seen the Aeolian Islands, and Cheryl had not ridden around the big island yet. Sicily held many new marvels for both of us.

On Wednesday, we hit the road early, and blew down the coast, borne by a pleasant tail wind. We stopped at a charming town called Scilla, not coincidentally named for the mythical monster that guarded the Calabrian side of the Strait of Messina (cfr, The Odyssey).

As I scanned the strait from the cliff, I could see how the eddy of Charybdis could have formed on the opposite side, especially with a northerly wind bringing the smoke from the Aeolian Islands down and whipping around the promontory of the Furies on Sicily. Memories of sea details sailing those waters brought up mixed emotions.

In mid-afternoon, we caught the ferry across the strait from Villa San Giovanni, and rode to the hydrofoil port by the Messina Train Station. To our dismay, Ustica Lines had just stopped taking bicycles on its high-speed ferries (hydrofoils and catamarans), because of the excessive tourist luggage this summer (our first hint that the tourist crowds had swelled this year). Only the traditional car ferry could take us to Lipari and the Aeolian Islands, and that sailed from Milazzo on the north shore. We rode to the station, and got on the train to Milazzo. We were on the first unplanned part of our tour: Sicily.

1 thought on “Calabria: jewel in the rough”