We had been living in Rome for three years when the brand new Pope, John XXIII, stunned his own cardinals and advisers by announcing that he would convene an Ecumenical Council. No one really understood how historic it would be, on so many levels. Three years later, in October 1962,

more than 2,000 Bishops and major prelates converged on the Eternal City to answer his call. It was the first time that an Ecumenical Council included outside observers (17 denominations of Eastern Orthodox and Protestants). In my opinion, it was the first true Ecumenical Council since the Council of Trent in 1563, because Vatican Council I only had a minority of bishops (Italians and some French) in attendance by the time that Garibaldi crashed through the Porta Pia on 20 September 1870 and scattered the assembly. Most of the cardinals and bishops were still on their way. (“Ecumenical” means everyone.) 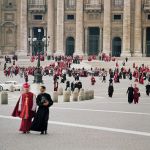 Rome was crazy with colorful clergy of all types wandering around. The American delegation was struggling. To their great surprise, there were no interpreting services at the Council, because every priest was expected to be fluent in Latin.

This was not a dead language for me and my classmates taking Latin IV at school. We were using it every day, interpreting for delegates or just helping with conversation practice after serving Mass each morning.

Mom and I operated the sauna and steam bath concession in the basement of the Cavalieri Hilton Hotel, which had just opened. As the first five-star, American-style hotel in Rome, the American prelates favored the Cavalieri Hilton, and many came down to our establishment to get over the stress of the day. The joke ran around the hotel, that our cool-down pool was full of holy water from the constant immersion of bishops and cardinals.

One night as I was closing up, I got a phone call from one of our regular clients, the Auxiliary Bishop of Newburgh, New York. He was a humble man, who did not like being called anything fancier than “Father.”

“Jonathan, could you come up to my room for a while?” he asked. “I have a document that we need help with tonight.” Thanking my lucky stars that I had finished my own homework already that evening, I took the lift up to his suite. He met me with a thick, typewritten manuscript.

“We were just given this today. I think it’s a draft Encyclical [major policy letter from the Pope]. The American delegation has a meeting right after breakfast to prepare our national response to it. But none of us can read it, especially something that thick in one night.”

“I can’t type or write that fast, Father,” I said, hefting the volume in my hands. He sat down at his coffee table, and pulled a large yellow pad of paper towards himself.

“I was wondering if you could read it to me – in English. I will take notes. I am hoping that will give us enough information to put something together in the morning.”

He was asking for a “sight translation,” something that court interpreters often do. Sight translation from Latin? Why not? I opened the manuscript and began to interpret, “Pacem in Terris…” Peace on Earth…

Today, I think that the first crack in the Berlin Wall appeared as I read, walking a circle into the carpet of his room. On Maundy Thursday, 11 April 1963, Pacem in Terris hit the world media, and the Cold War began to come to an end. It was the first encyclical not written to Catholics, but to all people. In it, Pope John blasted both sides of the Cold War, and told them to get on with taking care of their people and start working on nuclear disarmament and non-proliferation.

Trip update: Last weekend for Palm Sunday, I tested going to church on Sunday in Rome. Every time that I have shown up at Saint Paul’s within the Walls (http://www.stpaulsrome.it/), they have welcomed me warmly. Stefano Vasselli, the Music Director, even let me sing in the Choir.

From 1961-1965, I was a member of the International Teen Club, which met in the basement of the church for weekend dances. I was also the DJ and at the end, Vice-President of the Club. The church has since put the space to better use as the Joel Nafuma Refugee Center (http://jnrc.it/), but the Teen Club years lived on in corporate memory. The first Sunday that I showed up last autumn, I felt a little embarrassed by the fame that still attached to my role in the Club.

Making rehearsal at 0930 meant catching the 0822 train to Rome’s Termini station and a brisk walk. We rehearsed a wonderful collection of special music for Holy Week, so I decided to come back for Tenebrae on Wednesday and stay for the Triduum. I was back in Formia in mid-afternoon. I repeated the commuting act the next day, because the sport coat and slacks that Nando Marcucci was making from the fabrics that Cheryl and I bought this summer were ready for a first fitting. After the fitting,

I went back to the Church for the regular Monday rehearsal of the Mozart Requiem, which a local chorus that Stefano directs would perform after Tenebrae on Wednesday. I had sung the Requiem twice before, so Stefano said that I could join them. I was back in Formia by 2330. Tuesday I rode to the Naval Support Detachment laundromat in Gaeta, and worked using their WiFi while the clothes tumbled around.

Wednesday I rode by the ATM in Gaeta, then caught the afternoon train to Rome, with my bicycle. Tenebrae was a moving service, with music by Tallis (Lamentations of Jeremiah). The Requiem performed to a full church, and it went very well. We sang Mozart’s Ave Verum Corpus as an encore. On Thursday, I rode the entire length of the bike path along the Tiber before going to the Church, a 70-km day. The Triduum Liturgy (a single service in three days) began that night with music by Gabrieli, Blow, and Duruflé. It will conclude tonight with the Great Vigil of Easter. Saint Paul’s is a beautiful church. Like Saint Paul’s in Charlottesville, it has great acoustics, and provides a moving environment for special events that include music and ritual.

Next week, I will outline the Intercontinental 2016 tour. I am always looking for new topics to include in the blog. Do you have any questions or suggestions?